Once upon a time, I thought the closest I’d ever get to experiencing fairy tales and castles would be through the stories I read and movies I saw as a child.  Little did I know that moving to Italy, would bring me that much closer to fulfilling my dreams of sleeping in a castle and feeling like a princess (even if it was just for the weekend).  Here’s my ultimate guide to Italian Castles and where you need to stay for that one of a kind, pinch me ‘cause I’m dreaming moment. 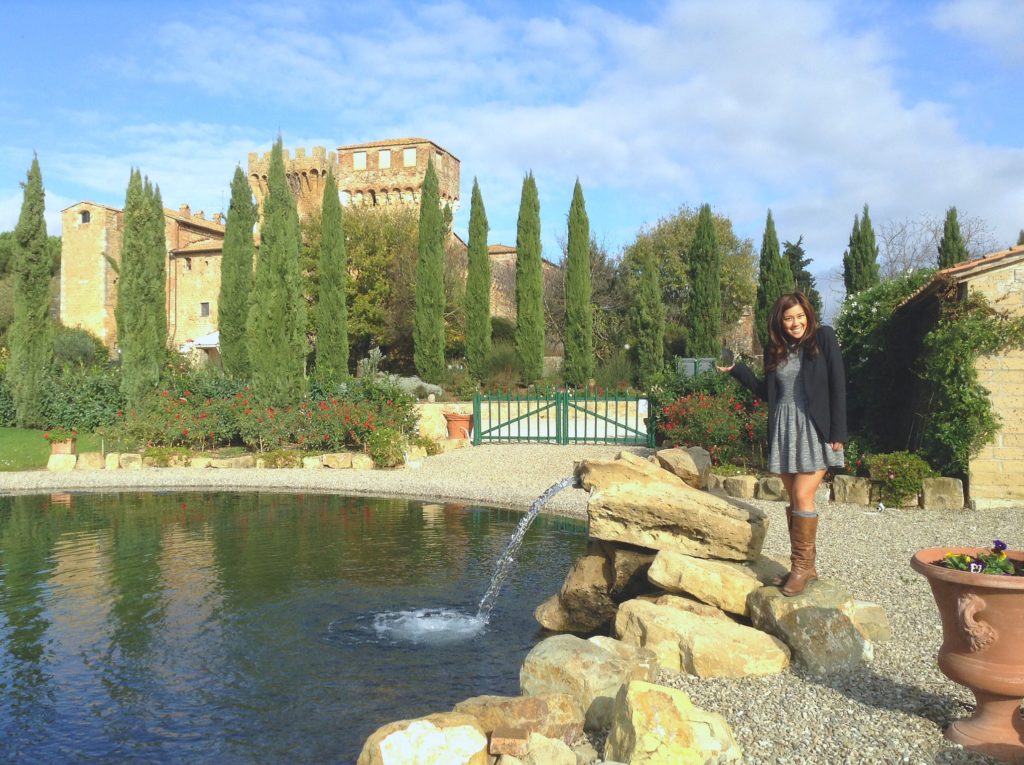 This was the first castle I’ve ever visited, let alone stayed at. Castello La Grancia is setup as a Farmstay, which Italians refer to as an Agriturismo. By car, it’s roughly a two-and-a-half-hour drive whereas by train it could take you quite a bit longer because there isn’t a direct train to Pienza.  The property is sprawling with different coloured rose and flower gardens.  They also have a medium sized bio pool (so cool, haven’t seen one before).  Since we visited during the fall, it was too cold to swim in, but we enjoyed sitting around the pool area being surrounded by nature.

The rooms are arranged differently here; we had a huge apartment with a living room, dining room and kitchen, which are the common areas for the three bedrooms in the suite.  All of the bedrooms have their own adjoining bathrooms. Looking back, I’m glad we were the only ones in the apartment, because I didn’t realize we were sharing a common area with the other two rooms. If we were staying with friends or family during the trip, this would have been the perfect setup.  I’m not sure if all of Agriturismo Castello’s rooms have the same arrangement or if this was a one off. The Castello isn’t as fancy as the others to follow, but it’s nonetheless as rustic Italian as you can get, while the backdrop is a castle of course.   Here, you eat off the land; almost everything is grown on the property or bought locally. It’s a back-to-basics kind of experience, and I can’t even remember if they have wifi.

I’d recommend staying here if you’re planning a family trip or travelling with a large group of friends.  The apartment and rooms are very spacious; and if you don’t mind sharing the amenities with other guests and being close to nature, this is the place to be. 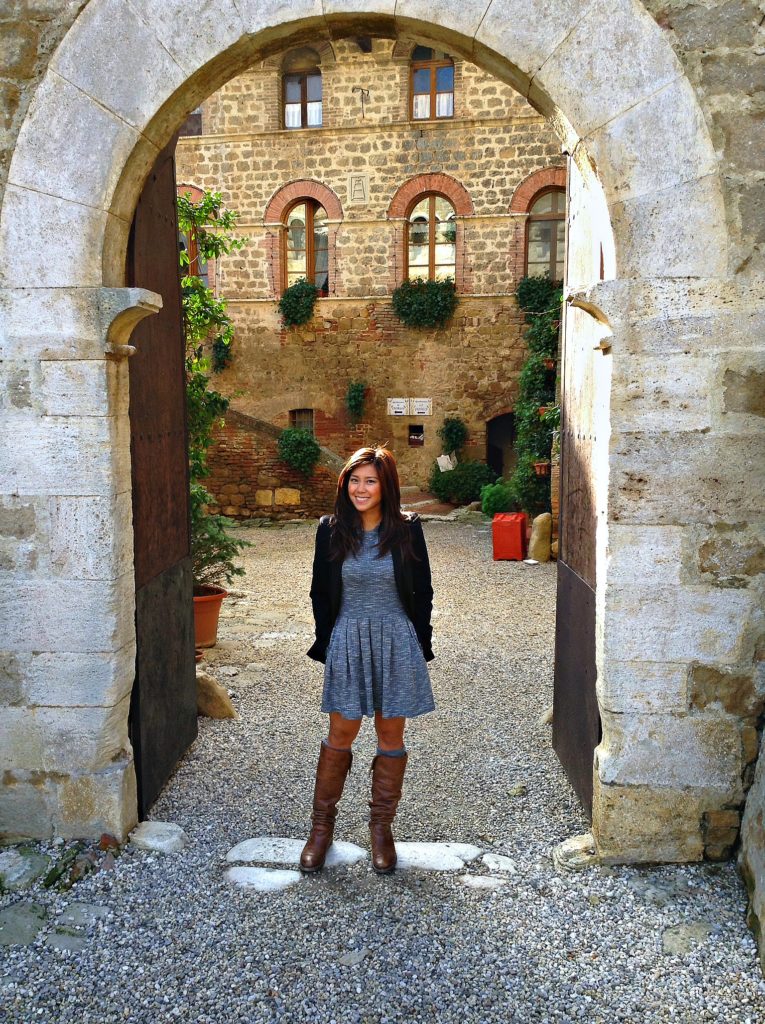 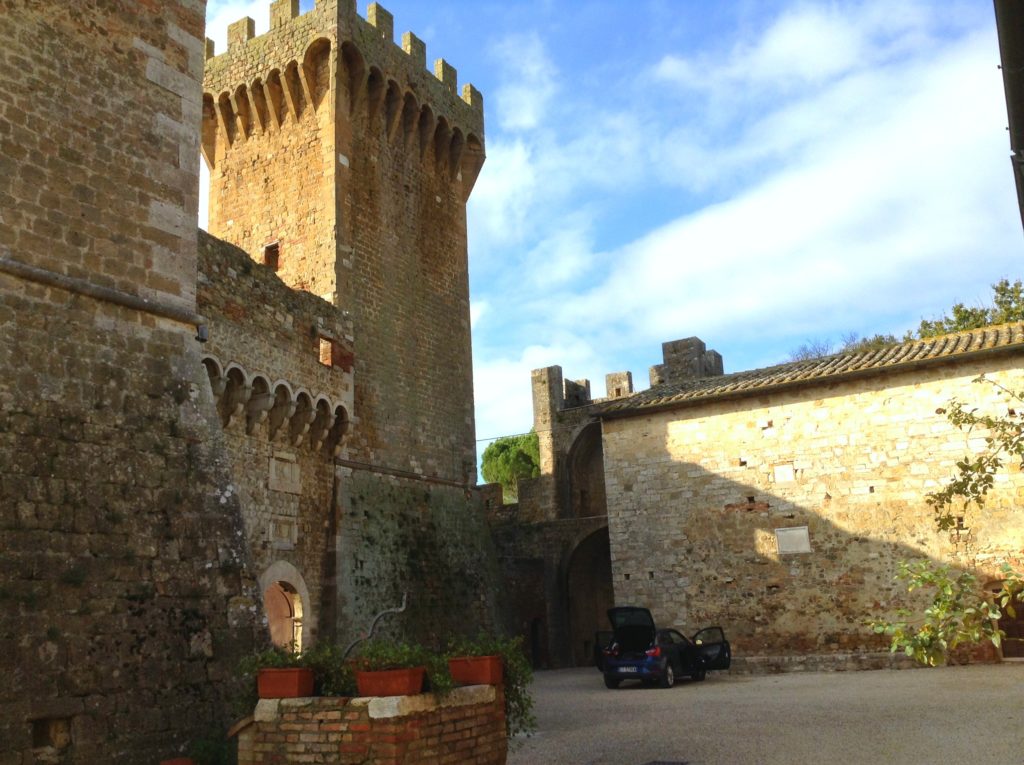 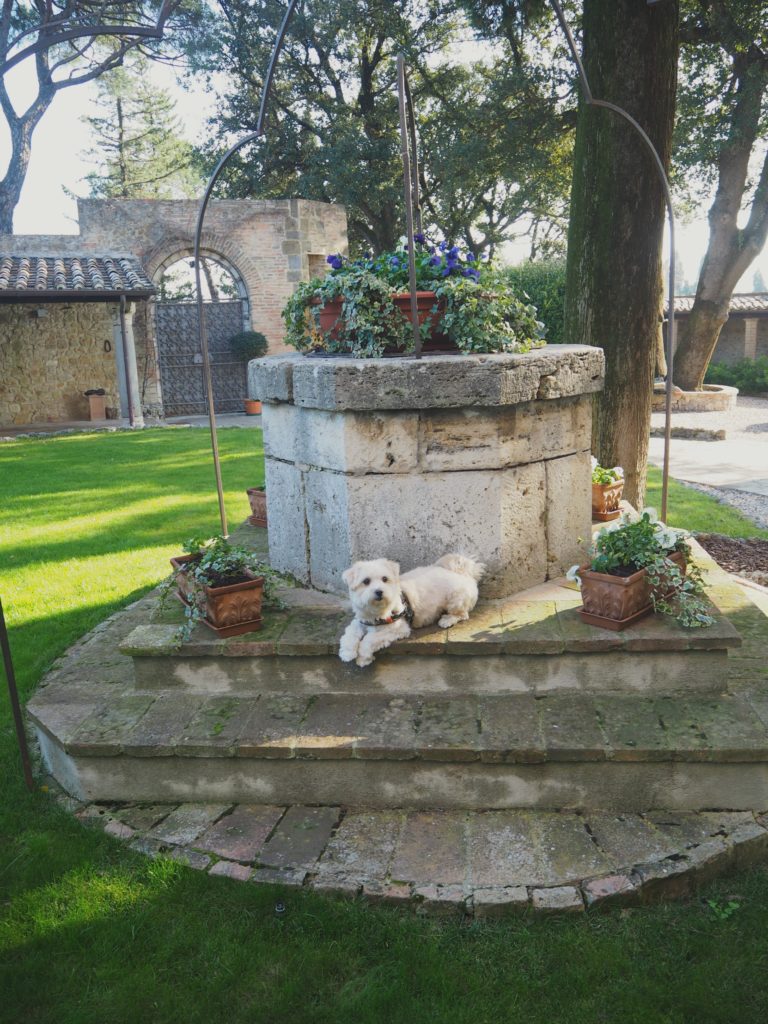 If I had to sum up this castle in one word, it would be luxurious.  Castello Monterone is quite impressive, literally right at the gate!  This is one of the prettiest castles I’ve ever stayed at by far. All of the details have a modern, yet delicate touch. From the décor of the rooms, to the well-maintained gardens, the breakfast / dining area were well spaced and very inviting (they offered such a wide selection for breakfast, it was fantastic) and the spa! Oh the spa indeed was perfection!

We stayed in the Camera Dell’Angiolo room which had it’s own cozy courtyard/front sitting area that lead into the common area and oversaw the pool and garden.  The room itself is cozy for two (we also brought along our small dog).  Their website did mention that dogs aren’t allowed, however we called and asked if they could make an exception because he’s a small dog, so they did.  Just a suggestion, never shy away from asking to bring along your four legged family with you even if the website states otherwise (they might make an exception).  The bathroom was entirely marble. At every turn, I always found myself being stunned with how gorgeous everything was.  I have this thing with big soft fluffy towels; I’m tiny, I know, I don’t need such a big towel, but I absolutely love the feeling of being completely covered and wrapped up after coming out of the shower! Guess what? Yep! They’ve got the big fluffy towels! As for the spa, we didn’t book a treatment, but guests are able to book time in the Turkish bath and sauna, so we did! They also had big fluffy robes, accompanying slippers and big fluffy towels (You can imagine I was in heaven!) to dry off with following the treatments (these came in handy as it was New Years Eve and it would have been so cold to leave the spa without thoroughly drying off).

This place was so wonderful! If you’re visiting Perugia and want to be surrounded with luxury while experiencing some relaxation and romance, I’d highly suggest staying at Castello Monterone! 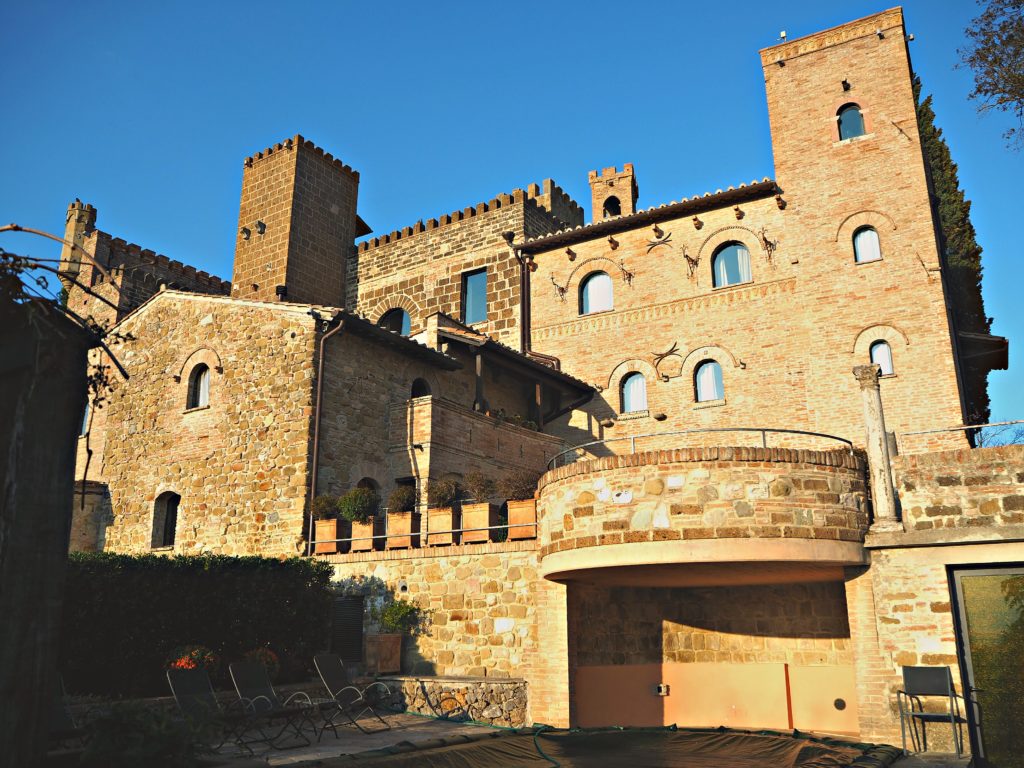 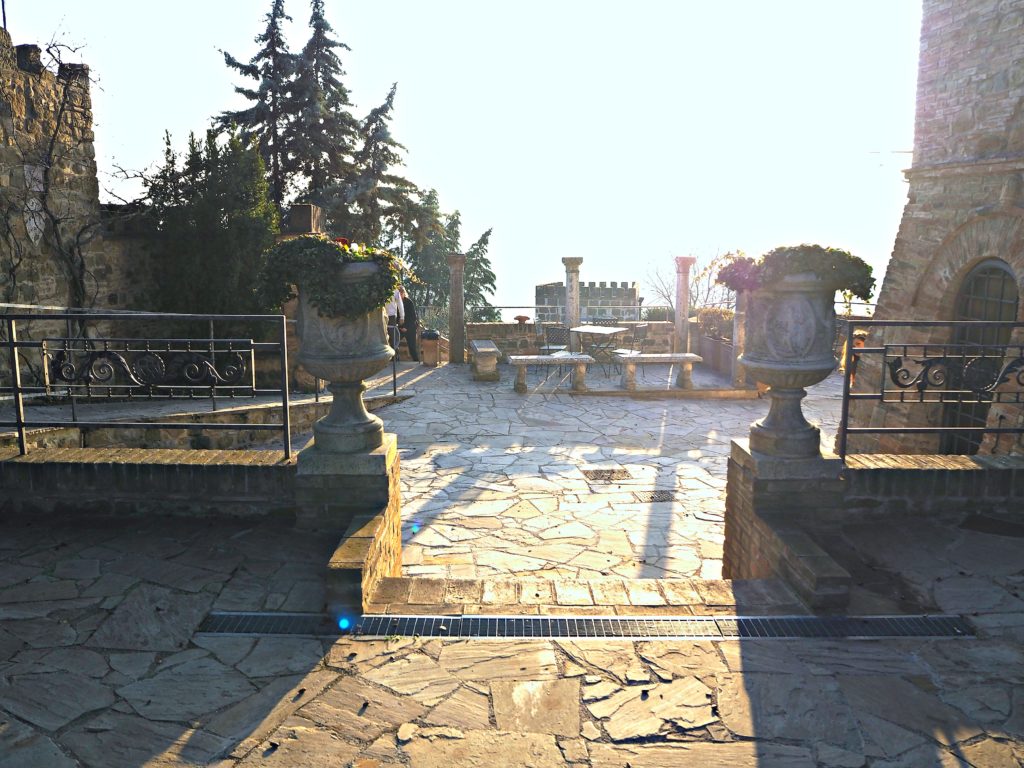 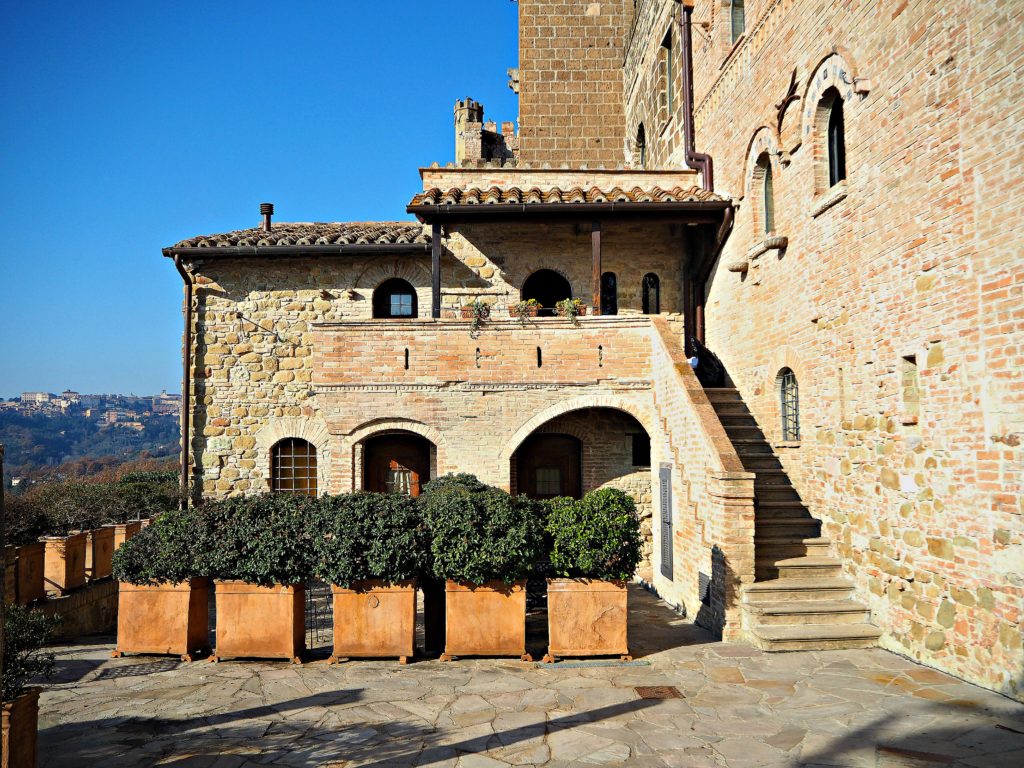 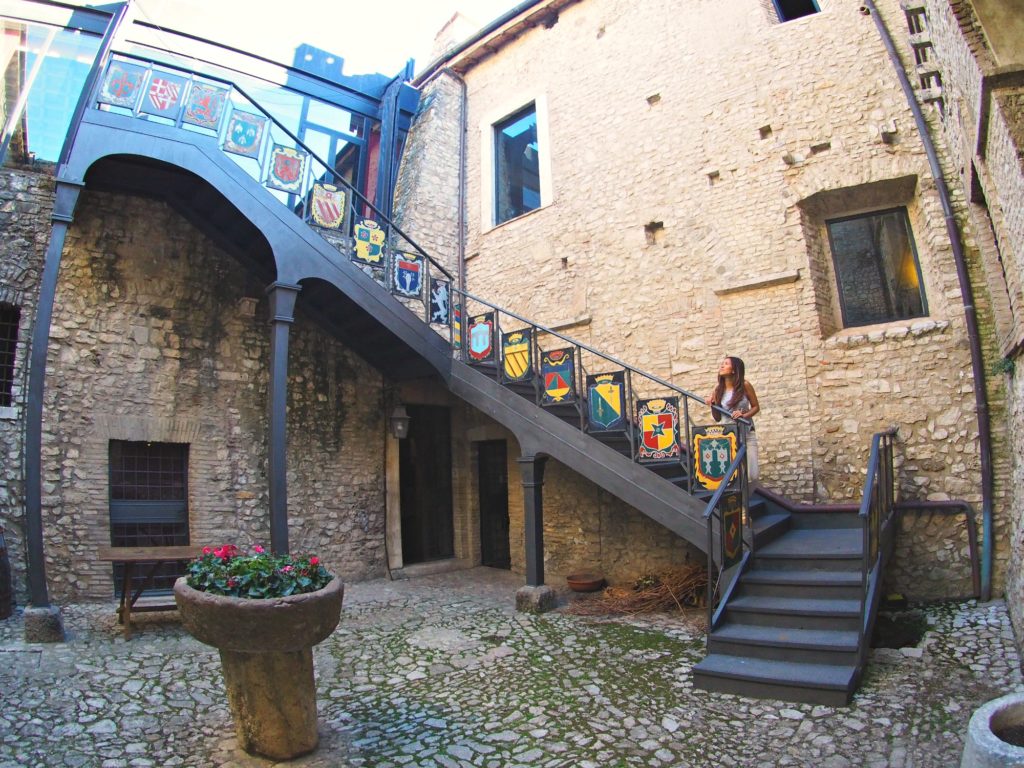 Sitting on a hilltop, you’ll find Castello Orisini.  It’s the third castle I’ve stayed at and dare I say it’s my favourite.  As much as I loved Castello Monterone (ohh so gorgeous), sometimes nothing beats an authentic castle with tapestries, armoured knights, velvet and canopy beds.  In my experience, I’d say this is the closest to the real deal as I’ve come.

We stayed in the “Royal Suite Stanza del Principe”. It was HUGE! It’s a two levelled suite, on the main floor there was a big flat screen TV, a massive canopy bed with light and heavy (adjustable) drapes to block out the sun from coming in,   rich wine coloured velvet doors to our closet and the bathroom had a Jacuzzi tub (I didn’t think two people could fit, but we made it work) on the second floor.  The window going into the bathroom, on the top of the stairs overlooked the garden, outdoor pool and lounge area.

We made reservations to have an aperitivo, which was accompanied with our own private sommelier, jams, cheese and meat plates along with various types of bread were served during the tour.  We visited in May and the castle had just opened their wine cellar (“cantina” in Italian), that they converted from a guard’s room which is situated next to the prison.  Although the space was still in a bit of disarray, I would have preferred to have the tour than to opt out of it hands down!  Following the aperitivo, we had dinner and dessert at the castle.  I got the lobster, which came with a lime sauce and a tomato salad, followed by crème caramel for dessert. It was delicious! But if it wasn’t for the aperitivo, the dinner portions would have been too small.

The inside of the castle along with the rooms are all elaborately decorated.  For breakfast, I was also pleasantly surprised with the variety.  I’d recommend staying in the Prince’s room, I really liked how old fashioned and authentic it was.  This is one of the most spacious rooms I’ve ever stayed in and found it to be the most enchanting. 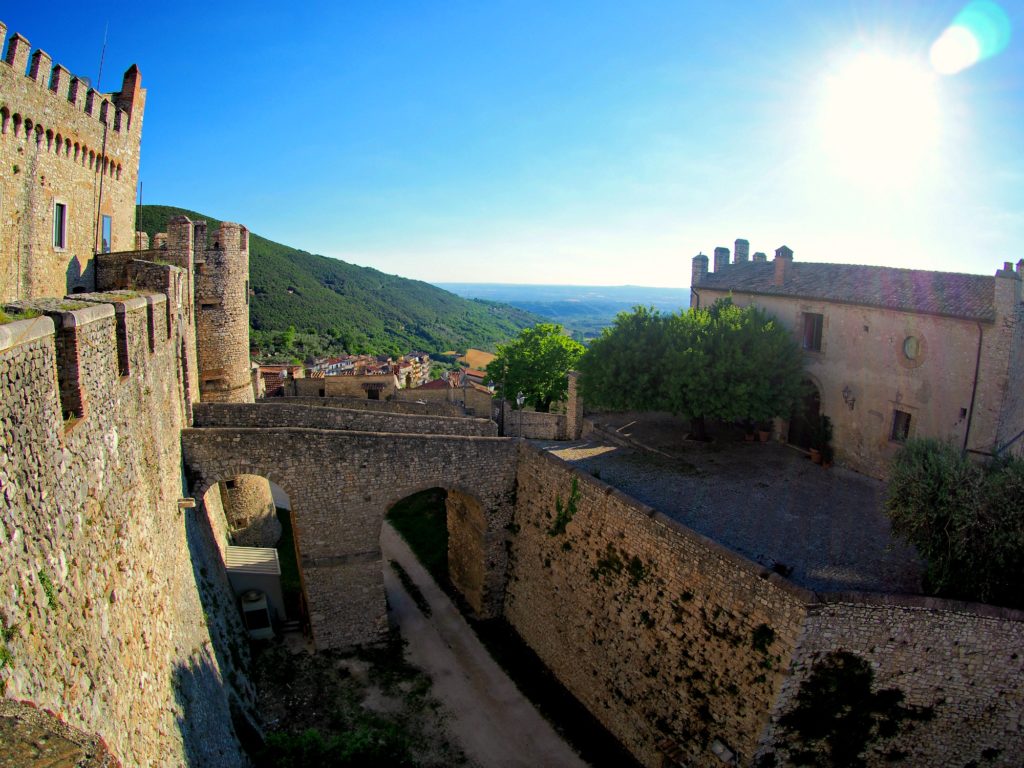 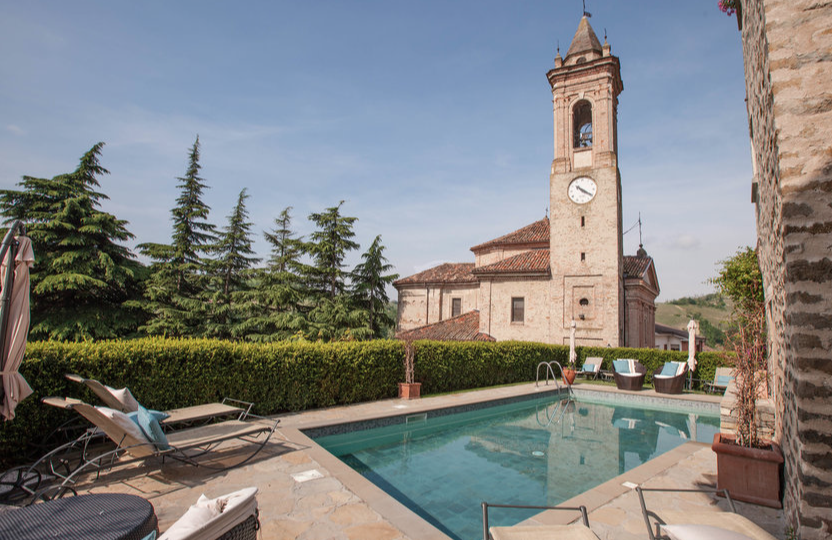 I haven’t explored this part of Italy yet and in my opinion there isn’t much to see in this particular part of town, but I’ve made some suggestions on pit stops to make if you’re considering a roadtrip. Sinio is located in the province of Cuneo, the surrounding area has a lot to offer for outdoor and sports minded folks, such as skiing, hiking and cycling routes. Getting to Sinio is more convenient and accessible by car than by train and did I mention it will also take you less time?  While heading towards the castle you could stop by the Maritime Alps National Park, or visit a thermal hot spring spa center after a long day of hiking (Lurisia seems to be nice, depending which route you take) and if you’re looking for a bit of history you could take a look at UNESCO World Heritiage Site; residences of Savoy. Also the International White Truffle Fair of Alba peaked my interest!

Now, let’s get talking about the accomodations! If I were to go to Sinio, I’d like to stay here.  I narrowed down my choices to the Courtyard Superior Double room or the Lower Tower Deluxe Jr. Suite.  The décor seems to have a balance between being upscale, relaxed and traditional, while the pool and lounging area seem to be comfortable and inviting. The food also looks superb, yum!  They also seem to provide recommendations to various wine tours, classes and sightseeing in the area, so I think that’s unique. 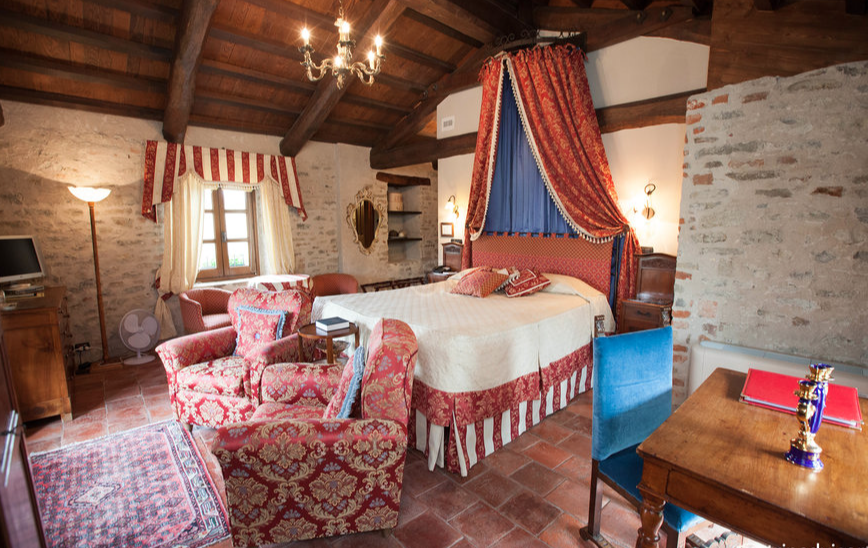 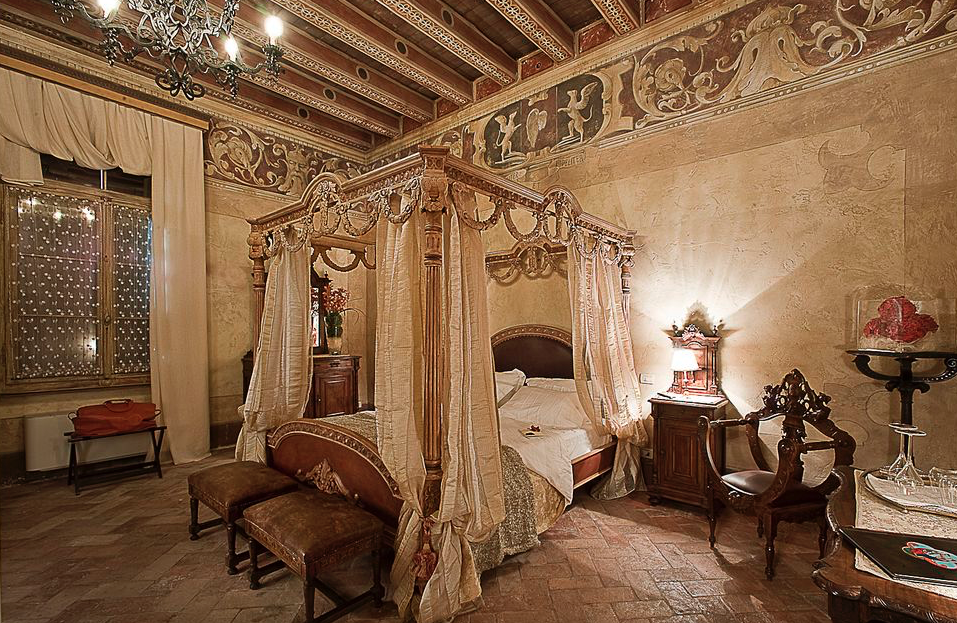 When you think of Verona, does Romeo and Juliet come to mind? If not, it will now.  There’s so much to see and do in Verona, from visiting Giardino Giusti, tomb raiding at Arche Scaligeri strolling through Piazza delle Erbe followed by a short walk you’ll find yourself at Juliet’s balcony (Casa di Giulietta museum) and the list goes on. After a long day a sightseeing and retracing Romeo and Juliet’s love story, you get to come home and begin your own at Relais Castello Bevilacqua, roughly an hour or so car ride from the city center.

This looks like an extraordinary elegant castle.  Here I’d pick the Junior Suite Royal Gregorio II room. I really like the look of this room, it’s high ceilings along with the fact that here’s a “hydromassage tub”, which I think is basically a fancier way of saying Jacuzzi (but I could be wrong).  The food seems a little fancier than I’m used to (also known as smaller portioned), but it looks good.  They offer wellness treatments in the privacy of your own room, murder mystery events, wine tasting tours, and they also have a gym! 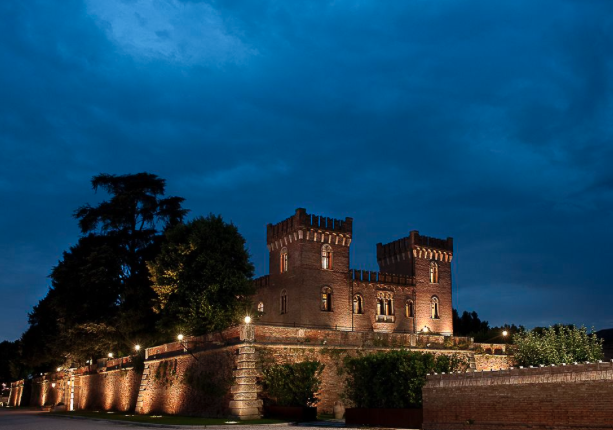 I hope you enjoyed reading my round up of top castles to stay at in Italy.  Let me know in the comments below where you’d prefer to stay at from these top 5 castles!